When trapped within an intolerable environment, we have seen how people will tragically seek a fateful escape from a burning building. Therefore, perhaps we can begin to understand the actions of a whale in trying to escape, what is for them, an unendurable inferno of sound - only to end up beached.

A rule of thumb suggested in 2016 by the US National Oceanic and Atmospheric Administration is that pulses of sound above 160 dB cause marine mammals to change their behaviour. For chronic, continuous, noise, that benchmark is a lower 120 dB. 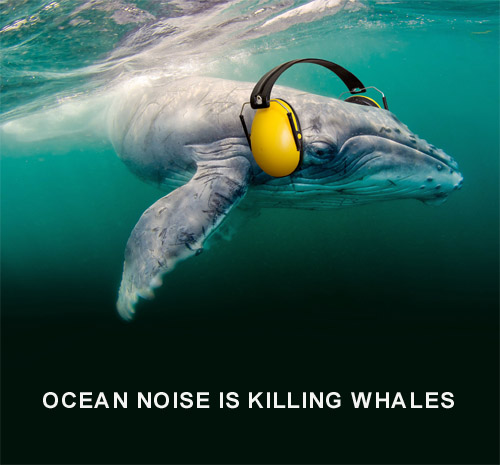 Navy sonar (sound navigation and ranging) is one of the causes of the numerous whale and other cetacean stranding's observed around the world. Mass whale stranding's are often coincident with previous naval vessel exercises. However, other mass stranding may be caused by storms, diseases, entrapment and other human activity.

Military sonar generates slow rolling sound up to around 235 decibels. This level of sound is equivalent to standing 3 meters (10 feet) away from the detonation of 1 ton of TNT. Whilst sound travels at around 340 meters per second in air. In sea water it travels around 4.4 times faster at 1500 meters per second. Sonar sound waves at 235 decibels can travel hundreds of kilometers. and retain an intensity of 140 decibels as far as 480 kilometers.

The first recorded incident of mass whale stranding's directly attributed to sonar was on 12 May 1996. NATO was testing an active sonar which resulted in twelve Cuvier's beaked whales beaching themselves alive along the coast of Greece. Since then, numerous cases of mass stranding's due to military activities have been documented. In his book, War of the Whales, Joshua Horwitz makes it convincingly clear, that the connection between naval sonar and deadly mass stranding's of whales is scientifically undeniable. His book also mentions that "In the aftermath of World War II, industrious whalers adapted military sonar to locate, drive to the surface, and herd their prey - but there were indisputably far fewer whales left to hunt". 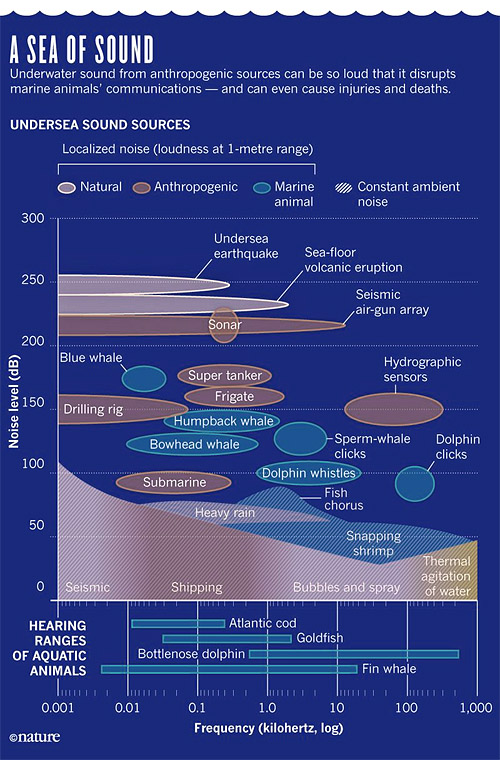 A Sea of Sound

Underwater sonar, especially that used by submarines, can be terrifying for a whale causing it to rapidly change depth, swim away or even beach itself to get away from the source. Autopsies on otherwise healthy beached whales have revealed nitrogen gas bubbles in their veins and brains and massive hemorrhaging, symptoms similar to decompression sickness, often called the bends. Other symptoms attributed to sonar include bleeding from eyes and ears, damage to the spinal cord, central nervous system and other internal organs, permanent or temporary hearing loss, behavioral changes effecting feeding and breeding.

Seismic testing, used to locate oil and gas beneath the seabed, can spread 3,000 kilometers under water.

Signals are produced by arrays of “air guns” that simultaneously shoot air at high pressure (13.8 MPa, or 2,000 psi) into the water. The sound level generated is approximately 250 - 260 dB, equivalent to the epicenter of a grenade blast.

The blasts are repeated every 15 seconds, over vast areas of the ocean at high volume, sometimes for weeks on end.

Acoustic echoes captured by strings of hydrophones enable sub-sea images to be generated.  Statistics from Australian waters show that during 2014 and early 2015, an average of 15,848 km of petroleum-related marine seismic surveys were completed every three months.

Research has shown that the abundance of zooplankton fell by 60% in the hour after air gun use. Researchers at Curtin University and University of Tasmania (both in Australia) report that blasts from a seismic air gun caused a two-to-threefold increase in dead zooplankton within 24 hours of exposure. In addition, abundance decreased by half in more than 50 percent of the species observed.

Seismic air gun blasts have been linked to whale stranding deaths and severe behavioral distress. During seismic testing in 2016 off KwaZulu-Natal, 10 whales beached themselves plus 42 birds, nine turtles, eight dolphins and five seals. The seismic process is not only a known risk to marine mammals, but also a previously unacknowledged risk to the entire marine ecosystem.

A recent court order sought to block Atlantic seismic blasting states “Seismic testing can be harmful and even fatal to the millions of dolphins, whales and other marine animals in the Atlantic,”

In addition to being devastating for marine life, seismic air guns are the first step toward dangerous and dirty offshore drilling with associated habitat destruction, oil spills and contribution to climate change and ocean acidification.