Ship Strikes: One of the biggest threats to whales

Endangered marine mammals are being killed at higher rates than is acceptable to keep their populations growing.

Ship strikes are an increasing threat to whales globally. According to the WWF, Shipping traffic increased 300% between 1992 and 2013, and continues to increase at a rate of 2-3% per year. Ships that keep growing in size and speed now move 10.3 billion tons of goods around the globe each year. Ship-based travel has also escalated, with fast-passenger ferries racing through coastal areas also used by whales and dolphins. 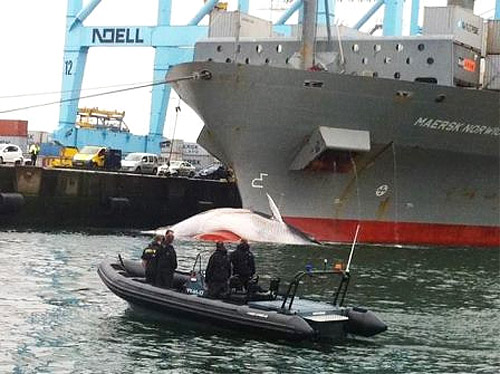 The whales that are found beached from ship strikes are only the tip of the iceberg. Most whales when struck usually sink and never float again. A 2017 study estimates that 17% percent of whales that are fatally struck by vessels ever surface, or wash ashore. The study shows that endangered marine mammals are being killed at higher rates than is acceptable to keep their populations growing.

The 2017 study shows that mortality from collisions with vessels is one of the main human causes of death for large whales.

The majority of collisions go unnoticed and unreported but the evidence is clear when many are found beached. In the case of endangered, endemic or geographically isolated populations, it may pose a significant conservation threat.

The population of the endangered North Atlantic right whale has been falling for at least the last eight years. The latest estimate stands at a mere 411 individuals. At the end of 2017, 17 carcasses were found in the North Atlantic and examination revealed that 7 of them had primarily died from entanglements in fishing gear and ship strikes. Over a five year period, entanglements in fishing gear accounted for 80% of serious injuries and deaths to right whales.

From a 2012 study that included North Atlantic right whales, 57% of 118 identified individuals showed net entanglement scars, 30% had died in the first four years of life due to ship collisions and net entanglement and there was no apparent population increase despite 60 years of protection.