Bycatch: The single most serious, direct threat to cetaceans.

An estimated 1,000 whales, dolphins and porpoises die each day due to bycatch and entanglement.

Cetacean bycatch is the unintended capture of whales dolphins and porpoises by fisheries. Bycatch can be caused by entanglement in fishing nets, gill nets and long lines, or direct capture by hooks or in trawl nets. Cetacean bycatch is increasing in intensity and frequency due to increasing human population growth and demand for marine food

A Serious and Direct Threat to Cetaceans

An estimated 40% of all sea life caught by fisheries is simply discarded as bycatch. For animals such as shrimp, the level of bycatch rises to a shocking 85%. A study into one U.S. fishery found that in a single year, 400,000 sharks were captured in nets and discarded. 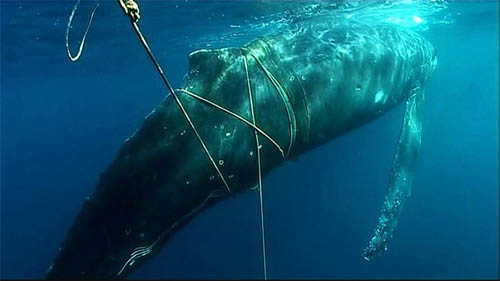 It is estimated that over 1,000  whales, dolphins and porpoises die each day due to entanglement in fishing gear or marine debris and explains why bycatch and entanglement is now seen as by far the single most serious, direct threat to cetaceans.

Daily Science reports that hundreds of thousands of whales and dolphins are killed each year as bycatch in commercial fishing. Many times that number are injured or crippled in their encounters with fishing equipment. Death is caused by asphyxiation or after months or years of painfully dragging nets and traps through the ocean. Some cetaceans survive, but with broken teeth and open wounds and severed limbs. Autopsies of naturally-deceased cetaceans show these encounters to be common. Off the west coast of Scotland, for example, one in five minke whales has scars of entanglement.

In the EU and UK, certain vessels must use an acoustic deterrent device, known as a 'pinger', to reduce the level of dolphin and porpoise (cetacean) by-catch.

In addition to the 1,000 cetaceans killed each day as bycatch, a further 100,000 small whales and dolphins are illegally and unreportedly killed each year.