The illegal, unregulated and unreported hunting of 56 species of small whales and dolphins by over 40 countries threatens entire populations and species.

The degree to which all coastal states are exposed to IUU fishing, and how they respond is provided in an index. The index consists of 40 indicators, based mostly on published information, but also on a short survey. Individual indicators are weighted as low, medium or high, depending on the strength of their apparent link to IUU fishing. The Index, launched in February 2019, can be found here.

IUU fishing vessels often operate in marine protected areas, which exacerbates the problem of overfishing. Moreover, non-target species, such as sharks, Bryde’s whales and whale sharks, dolphins, rays and turtles, become trapped in the illegal fishing nets. These unwanted species, known as by-catch, are tossed back into the ocean, most often dead from drowning and/or entanglement in nets.

Using DNA testing for species identification, several hundred samples from retail markets in Japan and South Korea indicated illegal hunting of humpback and gray whales. One sample from a sushi restaurant in Santa Monica, California, was identified as an endangered sei whale. Similar work is underway to document the prevalence of protected shark species in Hong Kong markets.

In his paper, Scott Baker, associate director of the Marine Mammal Institute at Oregon State University, describe the long legacy of falsifying whale catch records, beginning with the Soviet Union, which failed to account for more than 100,000 whales it killed in the 20th century. This illegal, unreported or unregulated whaling "continues today under the cover of incidental fisheries bycatch and scientific whaling." 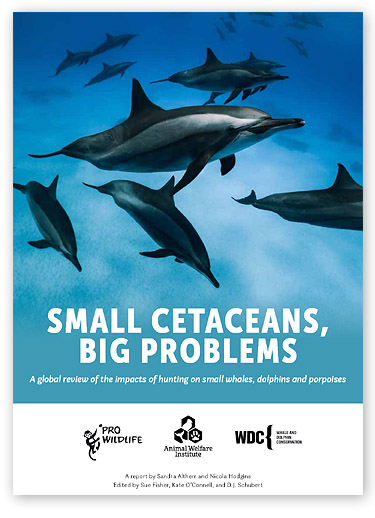 A global review of the impacts of illegal hunting on small whales, dolphins and porpoises. Download

In August 2018, Whale and Dolphin Conservation (WDC) summarised a disturbing report on the number of cetaceans illegally hunted in more than 40 countries.

The hunts target 56 different species and many are used as bait in shark, tuna and other fisheries. Rudimentary hunting means are used, including the use of dynamite.

Most of these hunts are unregulated, illegal, unsustainable and with unknown impacts on marine populations. It is likely that entire populations, even species will be wiped out. The full report can be found here.

The number of small whales and dolphins killed each year by the worst offenders are:

A summary of some of the more shocking revelations can be found here.

In addition to the 100,000 small whales and dolphins killed each year illegally and unreportedly, a further 1,000 cetaceans are killed each day as bycatch.