A shoreline festival of whale and dolphin slaughter - A Faroese fun day out for the whole family.

A fun day out for the whole family

The Faroe Islands are a semi-autonomous region within the Kingdom of Denmark. The Faroese maintain sovereignty over most domestic issues, while Denmark represents them internationally.

The annual whale hunt is carried out every summer for pilot whales and white-sided dolphins. The cetaceans are herded toward the shore in motorised boats where they are slaughtered, a drive hunt similar to the Japanese Taiji dolphin hunts. Whole families participate and watch the primitive ritual, which has been taking place since at least 1298.

Children are encouraged to watch and participate from a very young age - which no doubt desensitises them to the bloody slaughter. The Observers report "Everyone was enjoying themselves". "There were lots of children and families there. They were all having fun, like they were at a football match. It shocked me how much they were enjoying it". 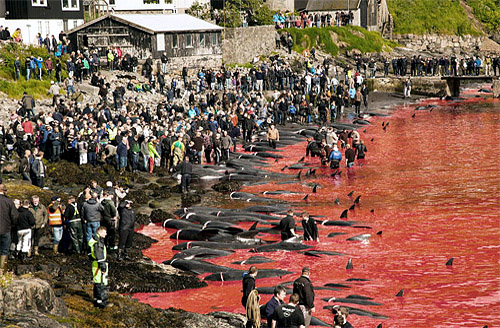 A festival of brutality 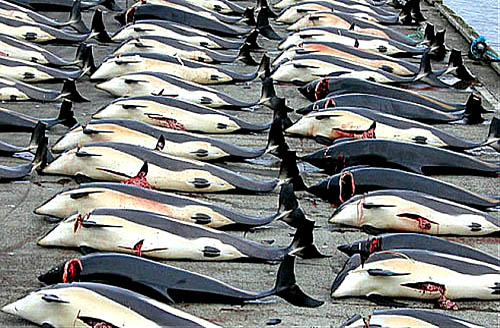 White-sided dolphins on the quayside at Hvalba

"In the twenty-first century, the tradition persists – not only because some people there like to eat whales, but because they enjoy killing them". - Heart of Darkness.

In his book Pilot Whaling in the Faroe Islands, Jóan Pauli Joensen includes a vivid description of the killing scene: "The whales were in dire trouble. In water too shallow for swimming they rocked and rolled without control. Their great tail-flukes reared many feet into the air as some of them caught their heads among the rocks.… They squealed in their agony beneath the reddening waters, their cries – like plaintive, pathetic whimpers – only just audible to those watching from the quay.… Within a few minutes of the start of the kill the harbor was a scene of gory madness and carnage, and the strong smell of blood filled the air".

In 2008, New Scientist reported that chief medical officers of the Faroe Islands recommended that pilot whale meat and blubber contains too much mercury, PCBs and DDT derivatives to be safe for human consumption. The issue of toxins in pilot whale meat is arguably the greatest threat to Faroese whaling, undermining the foundations of the practice.

On 8 May 2017, with the formal support of 27 Members of the European Parliament, Sea Shepherd Netherlands officially submitted a request to the European Commission to launch infringement proceedings against Denmark for facilitating the slaughter of pilot whales and other cetaceans in the Faroe Islands.