Around 93% of all heat trapped by greenhouse gases accumulate in the Earth’s oceans.

As man continues to overload the atmosphere with carbon dioxide, heat is trapped (greenhouse effect) which steadily increases the planet's temperature, and that of the oceans.

Ocean warming is causing sea levels to rise due to thermal expansion and the melting of glaciers and ice sheets in the Antarctica. A recent study suggests that up to 390 billion tons of ice and snow are melting away each year. The study adds that since 1961, the world has lost 10.6 trillion tons of ice and snow. Melted, that's enough to cover the lower 48 U.S. states in about 4 feet of water.

Ocean heat content is one of the main measures of climate change, with around 93% of all heat trapped by greenhouse gases in the atmosphere accumulating in the Earth’s oceans. 2018 was the hottest year ever recorded for our oceans, and they are warming even faster than previously thought. 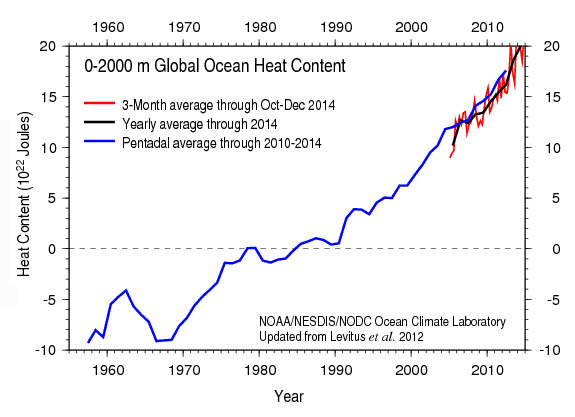 In February 2019, CarbonBrief reported that warming of the world’s oceans has caused the total amount of fish that can be caught sustainably to fall by an average of 4% globally since the 1930's. Damage to harvests has been particularly severe around the UK in the North and Irish seas, where the maximum sustainable yield has dropped by up to 35%. Fish particularly affected in the North Sea include Atlantic cod, sole and haddock.

Global warming is also causing heat waves that are increasingly affecting the world oceans. As heat waves have increased, kelp forests, sea grass meadows and coral reefs have been lost - these are foundation species critical to life in the ocean.

A further study, also published in February 2019, shows that climate change will reverse the recovery of whales in the Southern Ocean by damaging the krill on which they feed. Models predict concerning declines, and even local extinctions by 2100, for Pacific populations of blue and fin whales, and Atlantic and Indian Ocean fin and humpback whales.

Models of ocean chemistry and biology predict that as the ocean surface warms in response to increasing atmospheric greenhouse gases, phytoplankton productivity will decline. Productivity is expected to drop because as the surface waters warm, the water column becomes increasingly stratified since there is less vertical mixing to recycle nutrients from deep waters back to the surface.

About 70% of the ocean is permanently stratified into layers that don’t mix well.

A 2015 study by the University of Leicestershire has shown that a 6 °C increase in the ocean temperature could occur as soon as 2100, and would stop oxygen production by phytoplankton by disrupting the process of photosynthesis.

Today, three major sensitive areas to global warming are rapidly crumbling away: the Arctic, Antarctica and the northern hemisphere permafrost. A 2016 study reported in the journal Science found that for every ton of carbon dioxide emitted, around 32 square feet of ice disappears. The Arctic ecosystems are under threat, making polar bears homeless and driving away Antarctic krill and the many animals that feed on them. It also impacts the production of ice-dependent algae, which feeds Arctic cod.

A further study published in February 2019, predicts that ocean warming could release undersea carbon reservoirs to the atmosphere. If undersea carbon reservoirs are upset again, they would emit a huge new source of greenhouse gases, exacerbating climate change. Temperature increases in the ocean are on pace to reach that tipping point by the end of the century. For example, a big carbon reservoir beneath the western Pacific near Taiwan is already within a few degrees Celsius of destabilising. Moreover, the phenomenon is a threat unaccounted for in climate model projections. Undersea carbon dioxide reservoirs are relatively recent discoveries and their characteristics and history are only beginning to be understood.

The ocean absorbs most of the heat held in the atmosphere, and as the ocean heats up, oxygen can't dissolve as well into the water. The warmer the water, the less oxygen it can take up. Fertiliser pollution can also cause phytoplankton to bloom, which makes the water chemically dense and oxygen depleted.

There are other factors that can cause oxygen loss but these are currently not fully understood. What is for sure is that previous models have significantly underestimated the observed oxygen loss, and ocean dead zones are much worse than previously thought.

A recent analysis in the journal Science shows that warmer seawater and pollution is causing the oceans to hold less oxygen. A comprehensive analysis shows that since 1960, ocean oxygen levels have fallen an average of 2% worldwide and up to 40% in regions, such as the tropics. The volume of the ocean with no oxygen at all has quadrupled, while oxygen-deprived swaths of the open seas have expanded by the size of the European Union.

As on land, oxygen is essential for the survival of all aquatic animals and its loss impacts every sea creature. One of the major consequences of oxygen depletion is falling fish populations. To avoid suffocation, the fish move into more oxygen-rich areas, they concentrate in these areas where fishermen find them. This has led to the illusion of abundance and to even more fish being harvested.

As a result, there has been an overall decline in fish populations of 4.1% in the 38 different regions around the world studied by scientists at the University of California Santa Barbara. Their research, published in March 2019, details this population loss in 124 species between 1930 and 2010. The areas most impacted by climate change and overfishing, they wrote, have lost up to 35% compared to their early 20th century levels. If this trend continues, the hundreds of millions of human beings who use fish as a primary source of food and make their livelihood from fishing will suffer.