Today, the hunting of whales and other cetaceans is akin to big game hunting. It serves no purpose whatsoever, other than that of the self interest of the whalers. This snapshot of whaling in the late 1890's entitled 'Whaling for Sport' refers to the pleasure and love of the sport of whaling by a Mr Walker. 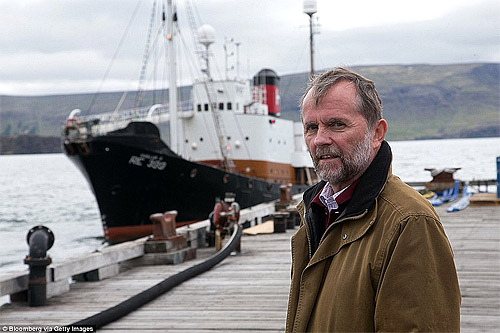 Kristján Loftsson's company Hvalur hf holds a license to kill a limited number of fin whales, which is the second largest animal on the planet after the blue whale and also an endangered species.

Loftsson's company is known for killing a rare blue and fin whale hybrid.

Marine conservation experts believe that blue whale-fin whale hybrids are not very common in the waters off Iceland, and are even more rare than blue whales. Astrid Fuchs, from the charity Whale and Dolphin Conservation, said: "Since 1983, they've only recorded five of these rare hybrids. Four of them have been killed by whalers and one is a very beloved whale watching object and is still alive - they are very rare".

In August 2018, the charity Sea Shepherd captured pictures of Hvalur employees dragging away an unborn whale foetus "to the trash" after its mother was harpooned and killed.

Marine biologist and whale expert Edda Elísabet Magnúsdóttir, has confirmed that the hunting of cows who are nursing calves is illegal, and it is easy to spot these animals. Since fin whales become pregnant on average every other year, give birth around the new-year and nurse their calves for at least half a year afterwards it is very likely that sexually mature females caught by whalers are at some stage of their pregnancy.

Before whales are killed, you can watch them as a tourist. A report from the University of Iceland said whale watching contributed $13.4 million to the economy. Unlike the endangered fin whales, Minke whales are hunted mainly as food for tourists. By eating whale meat, tourists are supporting and perpetuating whaling – and no amount of ‘it’s a one off’ or ‘when in Rome’ arguments can justify it. Responsible Travel advises on what visitors to Iceland can do.

Reykjavik Grapevine reports that Hvalur hf. is the last company in Iceland to hunt endangered fin whales, despite the total absence of a domestic market and highly limited market overseas.

In September 2014, The European Union, its 28 Member States and the governments of the United States, Australia, Brazil, Israel, New Zealand, Mexico and Monaco, declared their opposition to the fact that the Icelandic government still permits commercial whaling, in particular the hunting of fin whales and the subsequent trading of fin whale products.

Four months later, in June 2019, The Maritime Executive reported that the government of Iceland has not issued a permit to allow Hvalur Hf to hunt fin whales this year, sparing over 150 whales from slaughter. The Fisheries Minister published regulations setting whaling quotas in February but did not actually issue the permit to Hvalur allowing it to use the quota.

The Icelandic government has also been made aware of a new scientific study, indicating its whaling quotas are based on grossly over estimated whale population assessments.

Whaling Violations to be Investigated

In June 2019, it was reported that Hvalur will be investigated for an alleged violation of whaling regulations on three separate counts. Namely: the killing of a hybrid whale, the harpoons the company uses for hunting, and the butchering and processing of whale carcasses.

In April 2019, it was reported that the Directorate of Fisheries hasn’t received copies of diaries from whaling vessel captains working for Hvalur, despite repeatedly asking for them.

The European Union has further expressed its opposition to whaling by Iceland in a demarche dated 15 September 2014: "The EU, its 28 Member States and the governments of the United States, Australia, Brazil, Israel, New Zealand, Mexico and Monaco, today declared their opposition to the fact that the Icelandic government still permits commercial whaling, in particular the hunting of fin whales and the subsequent trading of fin whale products".

The Natural Resources Defence Council together with several environmental groups have launched the Don’t Buy from Icelandic Whalers campaign.

The majority of Icelanders want whaling to end

Only 2% of Icelanders say they eat whale meat regularly, the majority of Icelanders want whaling to end. The International Fund for Animal Welfare and their Icelandic partners are campaigning to end whaling in Iceland. More information, insights and a petition can be found at their campaign website.

Iceland will not hunt whales during the summer 2019

On 27 June 2019, Reykjavík Grapevine reported that for the first time In 17 years, Iceland will not hunt any whales this summer. So, the endangered fin whales and minke whales will be able to swim in peace this summer and enjoyed by the whale watchers. Hopefully, the whaling pause this summer will be the beginning of the end of whaling in Iceland.