Using toxic whale meat as food for dogs and tourists and surplus given away, dumped at sea or burned.

Norway has quietly become the world’s leading whaling nation, killing more whales in the past years than Japan and Iceland combined. 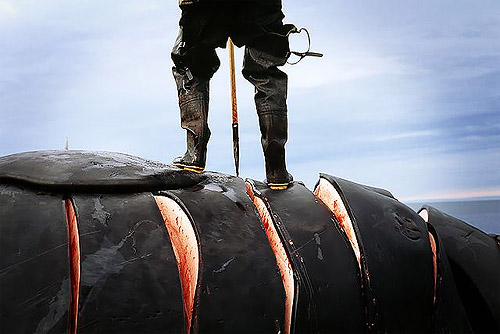 The Times reported that Whales caught by Norwegian vessels take up to 25 minutes to die after being shot with grenade-tipped harpoons, the Norwegian government has admitted.

In Norway, the demand is so low that 60 tonnes of whale meat had to be given away in 2017 due to poor sales.

Norwegian whale products are used as food for pet dogs, sled dogs, farmed mink and foxes, and other animals.

The Norwegian government is encouraging research into the uses of whale oil, including pharmaceuticals and food products. Whale products with no market, such as blubber, offal, meat and bones, have been dumped at sea causing a public outcry in August 2015, or burned.

To stimulate demand, a public relations campaign was launched to promote modern food products, such as whale burgers, whale ham and whale pastrami. The Norwegian fisheries and whaling industry has also supported the development of this website which promotes 'good, healthy, nutritious whale food'. No mention that the Norwegian whale products are toxic and contains the pesticides aldrin, dieldrin, and chlordane. On a number of occasions, Japan has refused Norwegian whale meat, citing health standard violations including elevated levels of PCBs, excessive amounts of live bacteria, and high pesticide counts.

In a September 2017 statement, the European Parliament sent an unequivocal message to Norway that it must stop whaling and exporting whale meat to Japan. The resolution clearly emphasises the EU position with regard to the cruel and unsustainable practice of whaling and that Norway's trade in whale products must end. Norwegian whale meat has also been linked to the country's fur industry.