How Man is Destroying His Own Life Support System - The Oceans

We have 10 years to save the seas or life on Earth will become impossible.

The sea provides most of the oxygen that we breathe and absorbs most of the carbon dioxide that we produce. The evidence shows that unless drastic action is taken soon, there will be a collapse of ocean life. Not just fish, birds and sea mammals, but importantly, the sea plankton that produces around 70% of the Earth's oxygen. Once a cascade collapse of the marine ecosystem has been triggered, the failure of our terrestrial ecosystems will likely follow leading to the end of life on Earth as we know it.

We cannot survive if we continue to poison the oceans

In a report published December 2018, the Global Oceanic Environmental Survey (GOES) has predicted that whale numbers, as well as seals and sea birds, will begin to crash over the next seven years. Whales make significant contributions in combatting climate change through carbon dioxide removal and oxygen generation, as explained here. 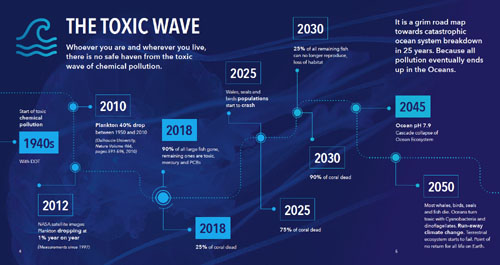 Due to the activities of man, whales are prematurely dying at an alarming rate and we only see those that are beached. You can check this yourself from the latest news.

The GOES Foundation has warned that man has 10 years to save the seas or life on Earth will become impossible.

The Foundation fears a possible collapse of the entire marine ecosystem within the next 25 year unless change is made now. The report adds that, had we not killed more than half of the world’s plankton with toxic chemicals since the 1950s, then we would not have had global climate change.

Dr Howard Dryden, the Foundations' chief scientific officer, admitted his cataclysmic prediction was hard to believe but insisted that hundreds of millions of people could starve after toxic chemicals kill all sea life.

Climate Change and Nature in Crisis

At the United Nations Climate Summit in Katowice, Poland, Greta Thunberg declared to delegates: "You are not mature enough to tell it like it is – even that burden you leave to us children." The 16-year-old Swede faced down the room of suits – and the world responded.

in December 2018, Greta addressed the United Nations Climate Change Conference and in January 2019 she was invited to talk to the World Economic Forum at Davos. Here, she said: Adults keep saying: "We owe it to the young people to give them hope.’ But I don’t want your hope. I want you to panic. I want you to feel the fear I feel every day. And then I want you to act. To act as you would in a crisis. To act as if our house is on fire. Because it is.”

A video of Greta giving her speech at the UN Climate Change Conference can be found here.

In the UK, School pupils had spoken too. In February 2019, The Guardian newspaper reported that thousands of school children and young people have walked out of classes to join a UK-wide climate strike amid growing anger at the failure of politicians to tackle the escalating ecological crisis.

Organisers said more than 10,000 young people in at least 60 towns and cities from the Scottish Highlands to Cornwall joined the strike, defying threats of detention to voice their frustration at the older generation’s inaction on the environmental impact of climate change.

Also at the United Nations Climate Summit, Sir David Attenborough said "The world's people have spoken, their message is clear. Time is running out. They want you, the decision-makers, to act now." 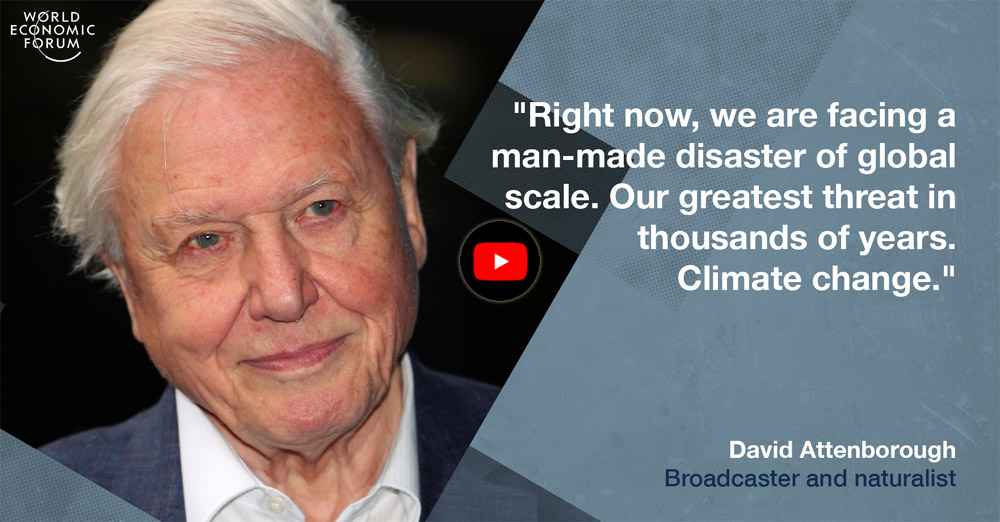 Sir David Attenborough told delegates at a UN climate summit in December 2018: "If we don't take action, the collapse of our civilisations and the extinction of much of the natural world is on the horizon." The naturalist was chosen to represent the world’s people at the summit in Poland.

The Devastating Impact of Humans on Nature

On 6 May 2019, The United Nations published a compelling report showing the devastating impact of humans on nature. The report is the most comprehensive assessment of its kind. According to the report, humans are driving one million species to extinction. With unambiguous factual clarity, the report makes clear the crisis humans are facing for life on Earth.

Greenpeace has commented that "It's time political and corporate leaders stopped making empty promises and started acting to prevent us sliding towards another mass extinction of life on Earth".

The human impact on the environment is having a devastating and increasing impact on whale populations and all other sea life. In addition to the whales killed by Japan, Norway and Iceland, even more whales, and other sea life, are increasingly dying from other human activity:

Global Fishing Watch is promoting ocean sustainability through greater transparency using  cutting-edge technology to visualise, track and share data about global fishing activity in near real-time and for free

The magnitude of ocean fishing can be seen from the Global Fishing Watch online platform which tracks tens of thousands of commercial fishing vessels. This example shows how the Japanese whaling ship Yushin Maru No. 3 was tracked.

How man is destroying the world's marine fisheries

World fisheries are collapsing because of continued human population growth, climate change, plastic and toxic chemical pollution, noise pollution, illegal fishing, seafood fraud and especially over fishing. On top of this, industrial fishing fleets dump nearly 10 million tonnes of dead fish back into the ocean every year - a shameful waste and total disregard for ecosystem health and future generations. Moreover, since 1950, 18 million tonnes of fish landed are used specifically for fishmeal and fish oil annually, 90% of which is human food-grade.

Over-fishing exacerbates the effects of climate change by creating conditions that make a fishing population more sensitive to environmental changes. Studies show that the state of the ocean is causing fisheries to collapse, and in areas where fisheries have not yet collapsed, the amount of over-fishing that is done is having a significant impact on the industry.

The Center for Biological Diversity reports that marine fish provide 15 percent of all animal protein consumed by humans. Under this intense pressure - 15 percent of 7.6 billion people (and growing), every year, year in, year out - global fisheries are collapsing.

A vast amount of the discarded waste of 7.6 billion consumers also finds its way to the oceans. 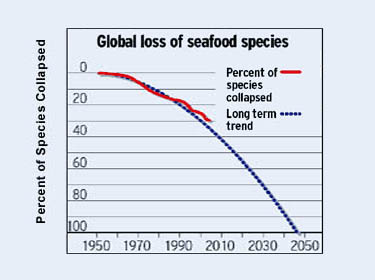 A 2009 assessment of the state of commercial fisheries around the world found that 80% of fish stocks had either been fully exploited, overexploited, or had collapsed. Just 9 years later In 2018, the United Nations reported that 90% of fish stocks are used up.

The graph on the left shows the accelerating loss of ocean species threatening human well-being. The study co-author, Nicola Beaumont an ecological economist with the Plymouth Marine Laboratory has said "This isn't predicted to happen, this is happening now, If biodiversity continues to decline, the marine environment will not be able to sustain our way of life, indeed it may not be able to sustain our lives at all.” The graph left, was taken from a 2006 study and little has changed since then, according to a 2019 report in the Ecologist.

In addition to the decline in ocean biodiversity, human population growth will increase pressure on remaining fish stocks. By 2025, demand will increase by 21%. By 2030, 25% of all remaining fish can no longer reproduce and by 2045, a cascade collapse of ocean ecosystems is predicted due to increasing ocean acidity.

World population and corresponding levels of CO2, O2 and temperature

The graph below helps us visualise the rapid increase in human population over a very short period of time. We now stand at around 7.7 billion as of June 2019 and the world population is continuing to grow at an estimated at 82 million people per year.

The rise in world population above, may be compared with the rise in global carbon dioxide and global temperatures levels in the two interactive graphs below. These graphs are loaded onto the page using current, real time data. Using the top right menu button in these graphs, you can also see the corresponding increase in the greenhouse gases Methane (CH4) and Nitrous Oxide (N2O). To re-set the graphs, refresh the page.

This graph features atmospheric CO2 levels that combine measurements from as far back as 800,000 years up to the present day with an atmospheric temperature overlay option.

This graph features a history of global surface temperatures that combine measurements from as far back as 800,000 years up to the present. Select a greenhouse gas from the graph menu to compare temperature to historical carbon dioxide, methane and nitrous oxide levels.

This graph displays earth's atmospheric oxygen levels from 1991 up to the present.

You can't replace whales by dumping iron in the ocean

Whales are nature's perfect cultivators of phytoplankton, efficiently distributing and placing essential nutrients exactly where needed on a global scale. Their loss would certainly accelerate the ongoing loss of phytoplankton to the detriment of man and life on Earth. It would be impossible for man to safely replicate the essential nutrient distribution of whales. Yet, man has already tried and experiments carried out.

Since 1993, scientists and businesses have intentionally dumped iron fillings and iron sulphate to iron-poor areas of the ocean as an experiment for profit to stimulate phytoplankton production. Understandably, some researchers are wary. The experiments are controversial and the consequences unforeseen. More insights may be found in a 2017, Scientific American report "Iron-Dumping Ocean Experiment Sparks Controversy".

Had the commercial whaling industry not slaughtered 3 million whales during the twentieth-century, then perhaps man would not be thinking about dumping iron into the oceans during the twenty-first century - to do a job that whales do naturally. A study published in 2010 estimates that restoring whale populations compares favorably with unproven schemes such as iron fertilisation in removing carbon from the ocean surface.

the Guardian newspaper reported in 2012 that in violation of UN regulations, a controversial American businessman had dumped around 100 tonnes of iron sulphate into the Pacific Ocean as part of a for-profit geoengineering scheme off the west coast of Canada.

The 3 million whales killed by man during the last century was the largest cull of any animal- in terms of total biomass - in human history. Had it not been for the loss of these ocean custodians then perhaps man would not be thinking about "Geo-tinkering" with the oceans. A related animal tragedy that also threatens the survival of man was reported in The Guardian newspaper - "Humanity has wiped out 60% of animal populations since 1970".

The Cost of Climate Change

Some links to climate change info:

The cost of climate change

The Guardian review of The Uninhabitable Earth - David Wallace-Wells.

Climate Change Facts and Effect on the Economy